Featured Article
China
Copper
2020
Copper
Chinese copper stocks are returning to favour as the outlook for demand brightens, with a late spurt delivering the best annual gain in half a decade fo...

Chinese copper stocks are returning to favour as the outlook for demand brightens, with a late spurt delivering the best annual gain in half a decade for the largest, Jiangxi Copper Co, reports Bloomberg.

What has ailed copper for most of the year largely dissipated last month as the U.S. and China closed in on an interim trade deal that will steady the global economy, and as Chinese data demonstrated that growth in the top producer and consumer of the metal is stabilising.

The benchmark London price, a barometer for the broader economy because of the metal’s wide usage in construction and power transmission, ended last week with a sixth consecutive gain, its best run in over two years. China’s manufacturing purchasing managers index, meanwhile, showed a second straight month of expansion in December.

Still, recent gains in the stocks may deter some investors, and the winners aren’t clear-cut. The prospects for miners that dig up ore could be healthier than for the smelters refining the metal, which are burdened by overcapacity and weak margins. Many of China’s big copper firms are active in both areas. While the smelting industry has signalled it will cut output this year to rescue treatment fees that have sunk to near seven-year lows, it’s the producers of the raw material that may be best placed to benefit from resurgent demand.

Copper tapped as the next big metals trade of 2020

Mines and Money London: “Copper demand is going to be psychedelic!” 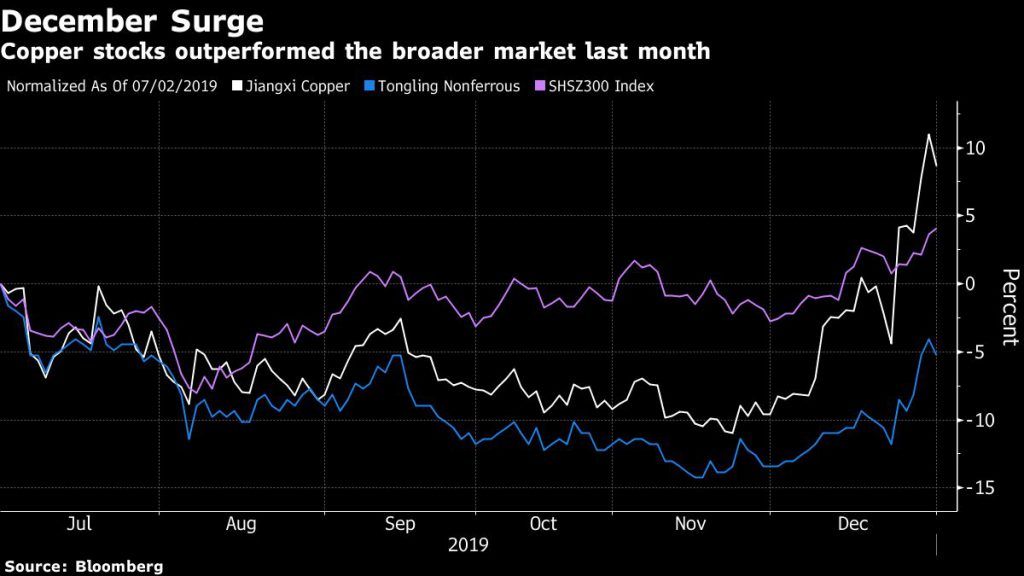 Stocks such as Jiangxi Copper, China’s no. 1 smelter and second-biggest miner, still have room to rally, said Wang Chen, a partner at XuFunds Investment Management Co. in Shanghai. “Copper prices have fallen to near cost and the downsides are limited,” he said. “Easing trade tensions and global monetary loosening are also going to boost demand and prices of the metal.”

Goldman Sachs commodities team is most bullish on copper for 2020, one of a cluster of banks that expects great things from the metal. After barely rising in 2019, Citigroup predicts that Chinese copper consumption will increase 2.6% next year, powered by gains in grid investment and demand from autos.

“The global economy is rebounding amid monetary easing, boosting demand for raw materials including copper,” said Yang Kunhe, an analyst at Pacific Securities Co. “Chinese PMIs are also bottoming out as anti-cyclical measures are working. There is still big room for stimulus. All these will benefit copper demand and prices.”

Yang recommends the mainland listings of miners including Jiangxi Copper, Zijin Mining Group Co. and China Molybdenum Co. He prefers them to pure copper smelters such as Tongling Nonferrous Metals Group Co., which are suffering from low profitability because the global supply of raw material can’t keep up with the country’s vastly expanded processing capacity.

Zijin Mining, also a big gold producer, is the most heavily favored by analysts, with 91% surveyed by Bloomberg holding buy ratings. Tongling Nonferrous is at 83% and China Moly at 60%, with Jiangxi Copper bringing up the rear on 47%.

Jiangxi Copper will also see significant returns from its interest in the Cobre Panama mine, part of its first overseas acquisition announced last month, according to Essence Securities Co. The broker has a buy on the stock, with a six-month target of 18.8 yuan, 11% higher than its end-year close.

Cautionary voices include Xiong Qi, the deputy head of research at Windsor Capital Management Co. in Beijing. “I am not comfortable chasing the rally in cyclical stocks including copper, lithium and cobalt,” he said. “They have surged a lot already and prices may face corrections.”