Mines and Money returned to London for the 17th edition of Europe’s leading mining event.

Welcoming 2,000 delegates to the capital city’s Business Design Centre, 150 mining companies were in attendance - ranging from exploration juniors to established producers and majors - for three days of insights and networking. Mining Global brings you the lowdown on this year’s hot topics… 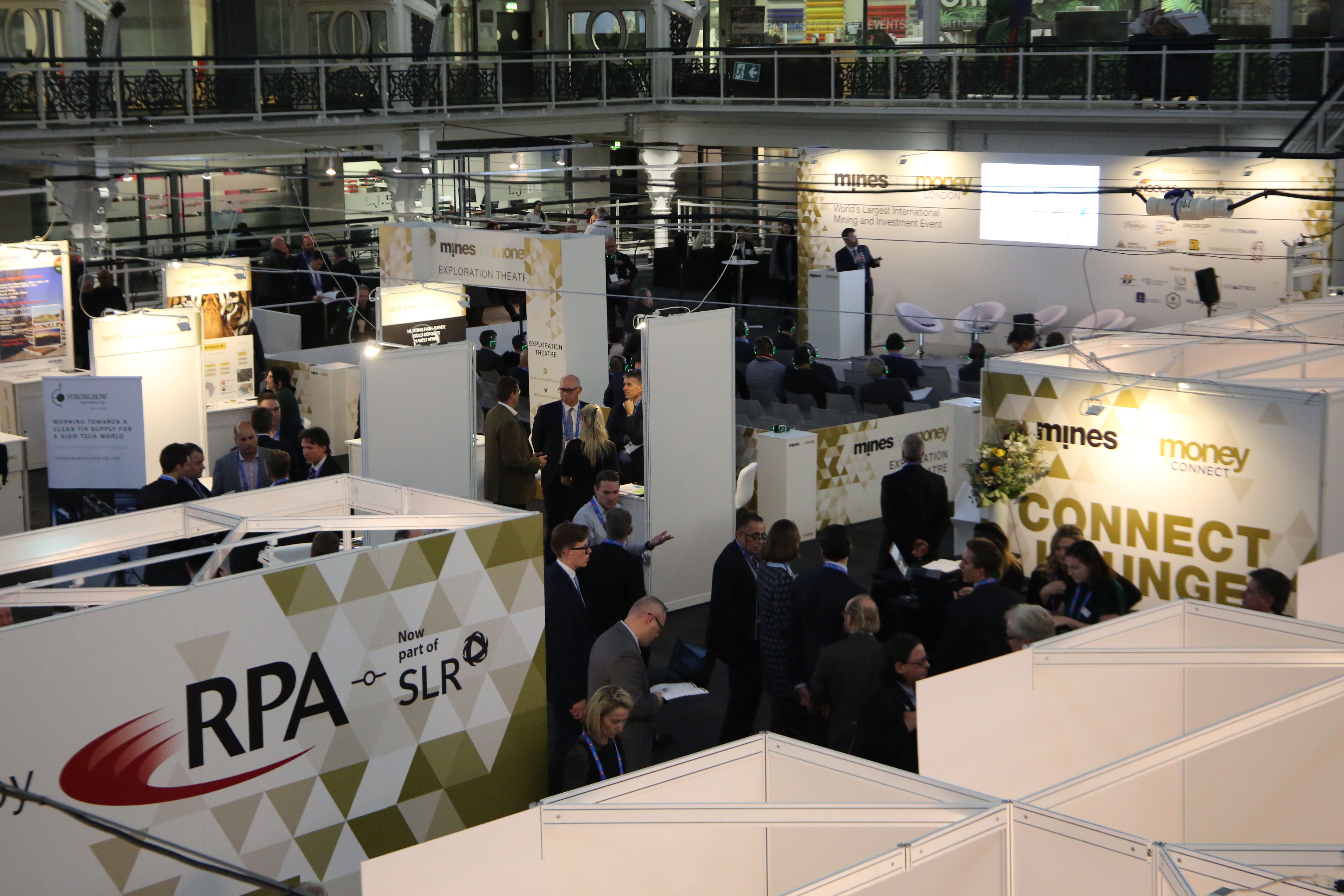 “Copper demand is going to be psychedelic!”

Mines and Money: London welcomed industry guru Robert Friedland to the main stage for the event’s first keynote speech. Shooting from the hip, and holding forth on everything from the China-US trade war to global warming, the serial entrepreneur predicted the rise of electric vehicles (EVs) will be a huge opportunity for the mining industry and investors: “Copper demand is going to be psychedelic!” he purred.

The numbers back up the self-confessed “ex-hippy” and his predictions for exponential rise in demand. The average combustion engine vehicle requires 20kg of copper, a hybrid 40kg, and a plug-in EV 109kg, while the cars of the future will need as much as 163kg of the metal. Sales are expected to rise from two million units in 2018 to 21 million units by 2030.

Several long-term trends are driving growth in copper demand and are expected to amplify in the coming decades. Along with the wider uptake of EVs, the boom in consumer electronics, the increased use of renewable energy sources and energy efficiency - coupled with the need for battery storage solutions - all require significant amounts of copper to function, with analysts forecasting a ten-fold rise in demand by 2050. A reason why Friedland was keen to talk up the potential of his company Ivanhoe Mines’ projects in the Democratic Republic of Congo (DRC).

The rise of copper will herald “the revenge of the miners” declared Friedland, whose no-nonsense appraisal of the industry’s likely inability to meet demand for the strategic metal had the packed auditorium hanging on his every word.

“Human beings wanting everything, all of the time and moving to cities will drive that growth in demand,” he said, alluding to the opportunity for the industry to make a positive contribution to the fight against air pollution and the quest for net-zero emissions. “Copper is rare and hard to find, but without it we don’t have a modern world… Lithium-ion batteries are made out of copper guys. So, when we start moving fully to electric vehicles we’re going to need a telescope to actually see the copper price… The big giga factories are coming… The industrial revolution starts in 2023 and it just builds for the rest of the decade.”

Is the coal industry dead?

The World Coal Association’s Chief Executive Michelle Manook was the coal sector’s sole representative at this year’s conference. Her presentation was at odds with Friedland’s analysis that being in the coal business was “like peddling crack cocaine”. Rising to his challenge, Manook sought to emphasise the Association’s support for the deployment of all low emission technologies.

“The World Energy Outlook 2019 report, alongside the recently published Southeast Asia Energy Outlook, is a reminder from the International Energy Agency that any credible energy and climate policy must focus on all fuels and technologies,” she said. “The Outlook forecasts that coal will remain the most significant contributor in global energy supply, particularly in developing economies in South and Southeast Asia. Reliable, stable electricity grids are vital to supporting the development of industries, businesses and public services that are the foundations of modern societies. Alongside this, coal is key to the materials - the steel, cement, concrete - that are used to build our societies.”

For these reasons, she argued that “transitioning to clean energy, doesn’t mean transitioning away from coal” which is still forecast to contribute 25% of the global electricity mix in 2040 while supporting what she called “the intermittency of renewables”. Manook affirmed that cleaner coal is real but needs more action. She highlighted the work being done with USC (ultra-supercritical) power plants in Japan and China where advanced air quality control systems were yielding non-carbon air emissions well below common standards in North America and Europe.

Calling for a recognition of the reality of energy demand, she pledged the coal industry remained committed to the zero emissions pathway and would be supporting advanced technologies such as gasification to produce gas from coal and other fossil fuels through IGCC (integrated gasification combined cycle) which also offers future potential for hydrogen production linked with CCUS (carbon capture use and storage) technologies, what Manook called “the final step on the pathway to zero emission coal”.

Driving new pathways towards a greener future represents a real opportunity for the mining industry. This was explored across several debates and keynotes seeking to examine the battery metals revolution and the initiatives being introduced to promote both exploration and production. Renault Nissan Mitsubishi’s Catherine Girard pointed out that guidelines and regulations around cutting greenhouse gas emissions were increasingly challenging for the car industry and a major factor in the automotive sector’s decision to embrace change. Striking an urgent tone, Girard warned that, with its seven-year production cycles, 2030 environmental targets were “tomorrow” for a sector that will need to secure the raw materials - copper, nickel lithium and cobalt – to meet expected demand for EVs.

been working with the UK government spending £274mn to push innovation in the battery space, driven by pressing concerns around air quality and climate change. “Automotive is facing the cliff edge for combustion engines,” she added. “If you look at the plot of CO2 emissions for the fleet averages of volume automotive manufacturers they are moving from what was around 170g of CO2 per km driven ten years ago to new regulations for 2030 stipulating 67g.” Moving from today’s average of 110g can only be achieved through EVs she stressed.

Crucial to achieving these goals, Smith noted that while “Europe is pushing the agenda” for a greener future, new mines for battery metals remains a big issue and he urged “securing offtake should be a priority”.

Analysis of the rare earths market was provided by Roskill’s Battery & Electric Vehicle Materials Manager, David Merriman. Reviewing the REE supply chain as a whole, he identified the clear bottlenecks for production outside Asia, heightening fears of Chinese dominance in a strategic metals market contributing towards rising tensions in the China-US trade war. With three decades of investment in mining, refining and trade, Merriman observed China has simply made more effort to develop the resource with further support for metal and alloy production where rare earths are vital for the manufacture of magnets uses in MRI scanners and in smart devices. However, while Light REE supply remains strong in China, Heavy REE supply is stretched with environmental legislation restricting development.

Throwing the spotlight on working with stakeholders in Africa, intriguing panel discussions on resource nationalism and responsible mining gave a platform for lively debate. Zambia’s Minister of Mines and Mineral Development, Richard Musukwa, was asked if African countries were in danger of “biting the hand that feeds” with stricter fiscal regimes. Musukwa mounted a robust defence of the region’s need to fight for the best deal for its citizens. “Multi-national companies operating in countries like Zambia need to have a social license to operate which takes into account the needs of the local people,” he said. “For a long time, we have been abused by our investors. We need to ensure we protect our people and our country.” Arguing that any fiscal choices made were not a “knee jerk” reaction, Musukwa pointed out that sometimes it’s a matter of dealing with companies who have broken the law with regards to the terms of investment and have failed to meet their contracted commitments which must be honoured to ensure sustainable mining operations in the future. “We feel very strongly that as the mining companies make a fair return on their investment, our communities must also be transformed,” he urged. “We would like the mining houses to be open and transparent and ensure that they are our partners. Africa’s governments remain committed to providing fiscal regimes that are simple, predictable, stable and anchored under the rule of law.”

Following a keynote ministerial address from Khalid bin Saleh Al-Mudaifer, Saudi Arabia’s Vice Minister for Mining Affairs, Darren Davis, CEO & President of Ma’aden gave his perspective on the global mining industry. He spoke about Ma’aden’s development over the past decade which has seen the 40,000 ounces of year gold producer increase that yield ten-fold. Adding the world’s largest bauxite to aluminium industry chain, creating the world’s third largest exporter of phosphate fertiliser, and joining forces with Barrick for a copper joint venture, Saudi Arabia has proved to be fruitful ground for the company’s expansion driven by a $25bn investment over ten years. “Much of Saudi Arabia’s resources remain undiscovered and it’s a part of the world yet to receive the full attention of the international mining industry,” he said. “Under the radar, it’s been a very good place to invest where gold and base metals prospectivity is high.”

Among the notable winners at this year’s Mines and Money Awards in London were Elaine Dorward-King, recognised as the Most Inspirational Woman in Mining. The Executive Vice President for Sustainability at Newmont Goldcorp has over 30 years-experience in the mining, chemical and engineering consulting sectors, integrating technical and cultural complexity combined with operational strategy.

Lucy Crane may be at the start of her career in the industry but her work as an exploration geologist for Cornish Lithium saw her named Young Rising Star in Mining. Her company’s efforts in developing a UK supply chain for the battery metal aim to create a new mining industry in Cornwall, focused on metals which will be key to a low-carbon future.

Michelle Ash, Chair of the Global Mining Guidelines Group, was acknowledged as the Technology Innovator of the Year. Ash was recently announced as the CEO for Dassault’s GEOVIA software division and is the former Chief Innovation Officer of Barrick Gold.

First Quantum’s Chairman of the Board and Chief Executive Officer Philip Pascall has seen it all across five decades in the mining and minerals sector. The industry legend was the recipient of 2019’s Lifetime Achievement Award which he followed up with a ‘fireside chat’ on the final day of conference.

Looking back at his successes, he joked about his “life sentence” in the sector but stressed the importance of understanding that while mining was a global business, reacting to the requirements of each country of operation and acting transparently throughout a mine’s life was vital. “Going in big is difficult,” he explained. “I’ve always felt that in the beginning you need to learn small and grow locally to manage risk before investing for the decades ahead.” Addressing the issues mining has with its reputation and, in the light of protests during IMARC, its image, he offered this insight: “Do you use the products that the mining sector produces? There’s an education process that needs to take place about the value we bring. It’s often less a criticism of mining and more about explaining how countries are benefitting from the industry.”