Zinc set for global gains from 2020

Zinc set for global gains from 2020

Zinc production is set for global gains in the coming years with production due to continue accelerating as rising prices spur miners to restart idled capacity and start production at key new mines.

According to the latest report from Fitch Solutions, elevated zinc prices relative to historical levels will incentivise investment in new projects, expansions and restarts as the economics of the projects maintain their attractiveness, market analysts maintain.

China will remain the largest global producer of zinc by a wide margin. China’s zinc production will stagnate due to declining ore grades and increasingly stringent environmental regulations, Fitch predicts. The report states the conservation of minerals and increasing consolidation of mining industries outlined in China’s 13th Five-Year Plan will weigh on zinc output in China.

Top Mining CEOs look ahead to 2020

Fitch forecasts Peru to remain a top zinc concentrate producer over the coming years. The country is home to approximately 57 mining firms, according to the Ministry of Energy & Mines (MEM). Despite the large number of players, Peru’s zinc sector is dominated by the Antamina operation which produced 409kt in 2018 and Nexa Resources’ operations of Cerro Lindo and El Porvenir.

Over the short-medium term, Fitch expects Antamina to continue driving production higher as the mine transitions to more copper-zinc ore and less copper- only ore between 2020-2022. Korea Zinc’s expansion at Pachapaqui and Nexa Resources beginning production at the Shalipayco mine will also support growth.

Peru has the third-highest number of new zinc projects in the pipeline at 15, according to Fitch’s Global Mines Database. 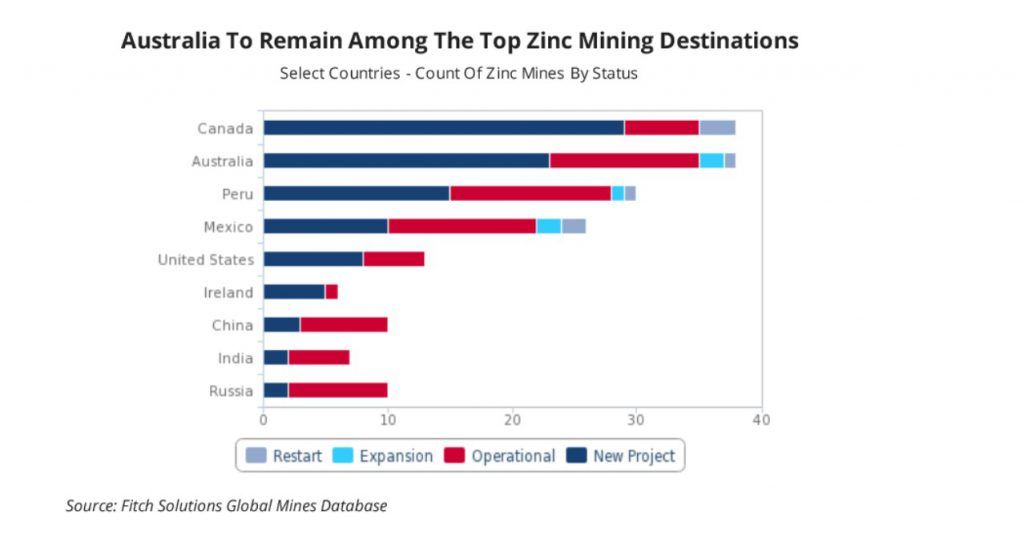 Following 2019’s year of robust growth, Fitch analysts expect Australia to maintain its positive trajectory over the coming decade. Over 2019, the ramp-up of MMG’s Dugald River mine and the restart of Glencore’s Lady Lorreta mine at Mount Isa led the increase in Australia’s zinc mine output by an estimated 14% y-o-y.

Given Australia’s healthy pipeline of projects, Fitch expects the country to average the second-fastest growth rate globally to 2028. Analysts forecast the country’s zinc production to increase from 940.0kt in 2018 to 1.3mnt by 2028, averaging 3.6% growth y-o-y, on the back of elevated zinc prices and the solid project pipeline.