As prices for the red metal ramp, top copper producing nations are on alert as they look for the fiscal stimulus to boost pandemic recovery...

Copper producers awash with cash after a doubling of prices are entering the next phase of the cycle: increased fiscal pressure from their host nations, reports Bloomberg.

News this week from three of the top copper-producing nations show authorities are looking for a bigger share of the windfall. While that’s not unusual in periods of high prices, this time there’s the added incentive of finding ways to fund pandemic recovery, while talk of a new supercycle is also helping to ratchet up political rhetoric.

On Wednesday, Chile’s lower house approved a proposed royalty on copper in a move the industry says risks thwarting investment. On the same day, Bloomberg reported that the front-runner in Peru’s presidential race will push for a tougher stance against mining companies to ensure more of the revenue generated by vast mineral wealth stays in state coffers. Hours earlier, the head of Zambia’s state-owned mining investments company was quoted as saying he wants a bigger slice of the revenues from copper operations. 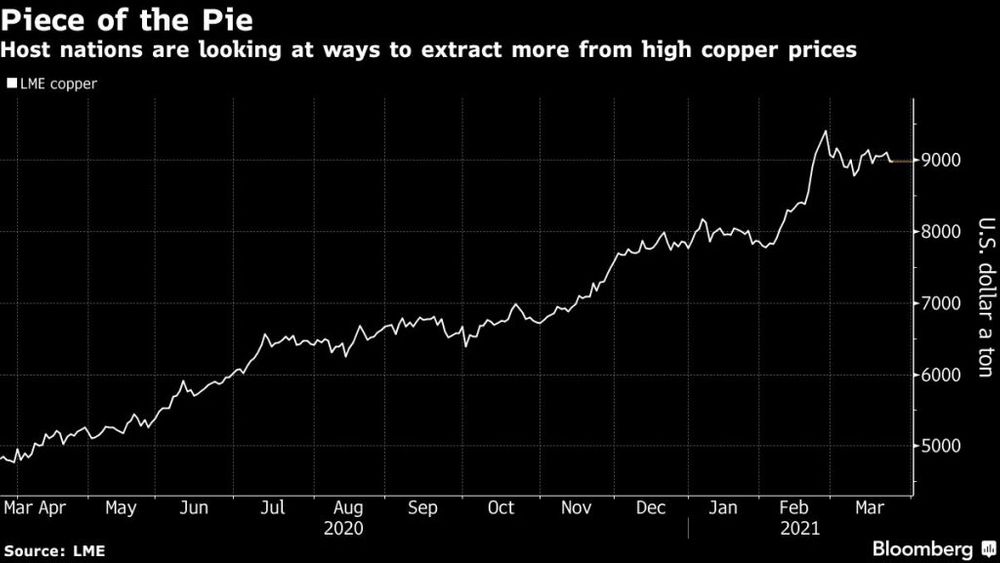 “We could certainly see more examples of this in the coming months,” Colin Hamilton, managing director for commodities research at BMO Capital Markets, wrote in a note to clients.

While copper futures have retreated from the highest levels in almost a decade last month, they’re still almost 90% up from a year ago after Chinese factories bounced back quickly from the pandemic and producers endured disruptions. Now the prospect of a global recovery aided by vaccines and a wave of de-carbonizing pledges paint a rosy longer term picture for the metal used in everything from wiring and pipes to batteries and motors.

That hasn’t gone unnoticed by mining company stakeholders including unions and governments.

In Chile, where the pandemic was preceded by months of anti-government protests, consensus is building that highly profitable sectors such as mining should help finance the pandemic recovery and reduce economic inequalities.

In a country that accounts for more than a quarter of the world’s mined copper, opposition lawmakers want to introduce a 3% tax on copper and lithium produced by companies such as BHP Group and Albemarle Corp. to fund development projects, responding to the rising social and environmental standards of investors and supply chains.

“It’s part of what our country needs — greater economic and social justice and an end to privileges that big companies have had,” Christian Democrat Deputy Ivan Flores said.

In neighboring Peru, the second-biggest copper supplier, Yonhy Lescano said he wants to close tax loopholes and negotiate profit-sharing agreements with multinational companies. Lescano is leading in all major polls ahead of the highly competitive April 11 first round election. His comments will resonate with some isolated communities in the Peruvian highlands that have resisted mining.

In Zambia, ZCCM Investments Holdings Plc, which is finalizing the purchase of Glencore Plc’s Zambian copper unit, also wants larger shares in other companies that produce the metal in the southern African nation, Chief Executive Officer Mabvuto Chipata said in an interview.

Zambia has progressively increased royalties after long complaining that miners in the country seldom report profits and as a consequence pay little in tax. Now ZCCM-IH is seeking to further increase its share of revenues as Zambia prepares to hold general elections in August. Copperbelt Province, home to the mines of Glencore and other foreign companies, is a key political battleground.

To be sure, such initiatives may not see the light of day. As a presidential candidate, Peru’s Ollanta Humala rallied with local communities against foreign mining companies only to embrace the industry after he won office. In Chile, President Sebastian Pinera may veto the royalty bill or seek to block it through the country’s constitutional court. 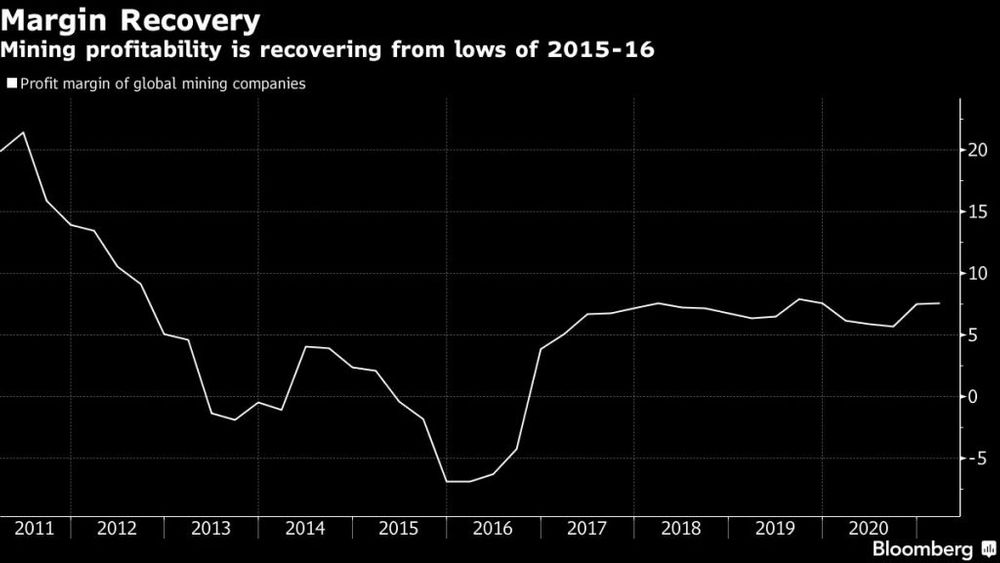 Companies, via their industry associations, will also fight against changes in the rules of the game. Management teams and boards that have endured previous cycles will be keen to defend margins at a time when operating and building mines is getting trickier and pricier.

But the industry will have to walk a fine line given the rising scrutiny on environment, social and governance issues.

With companies stepping up to highlight their ESG efforts, “host countries may find that the miners might not be as passive this time round,” Bloomberg Intelligence analyst Grant Sporre said in an emailed response.

Following a marginal slump in copper production due to COVID-19, output from top ten companies set to rise up to 3.8% in 2021 reveals GlobalData analysis

Copper production from the world’s top companies is set to increase by up to 3.8% this year, following a fall of 0.2% in 2020, GlobalData analysis reveals. Last year’s marginal slump saw production drop to 11.76 million tonnes (Mt).

The initial impact of the COVID-19 pandemic on mining operations was immense, however, six of the ten largest copper producers succeeded in increasing output last year. In 2021, copper production from the top ten copper companies is expected to bounce back, rising by up to 3.8%, to reach 12.2Mt, according to GlobalData, a leading data and analytics company.

The highest increase in copper production was by Canada’s First Quantum, which, despite all the challenges, reported 10.4% growth in 2020. The company’s Sentinel mine in Zambia and Cobre Panama were key contributors to this growth. While the latter remained under care and maintenance between April and August 2020, it delivered record production levels during the subsequent months.

Vinneth Bajaj, Associate Project Manager at GlobalData, commented: “Despite Codelco reporting over 3,400 active cases during July 2020, the company achieved 1.2% growth in its production in 2020. The company implemented a four-phase plan, as part of the COVID-19 measures, to ensure the health and safety of its employees, while also avoiding any significant impact to its copper output.”

Although the overall impact was minimal, declines in production were observed from Glencore (8.2%), Antofagasta (4.7%), BHP (3.9%) and Freeport McMoRan (1.3%). Reduced operational workforces due to COVID-19 measures, lower ore grades and production halts due to maintenance were the key disruptors to output during 2020.

The move towards electric vehicles and clean energy from renewables sources such as solar panels and wind turbines has driven the copper price to all-time highs. Copper has been among the best performers over the last month where metals ranging from aluminum to iron ore have surged to their highest prices in years. The rally is being fueled by stimulus measures, near-zero interest rates and signs that economies are recovering from the global pandemic.