The diamond market, like most commodities, has been hit hard by falling prices and rising costs. The volatile sector has caused companies like Rio Tinto...

The diamond market, like most commodities, has been hit hard by falling prices and rising costs. The volatile sector has caused companies like Rio Tinto and Anglo American to rethink strategies surrounding the precious gem, even making them question whether the industry was worth staying in.

But that’s all changing now.

Diamonds are now delivering some of their healthiest returns. Rio’s precious stones division doubled its aluminum sector, while Anglo American’s diamond unit boasted a higher rate of return than its core businesses.

"We expect the demand requirements to grow around 6% per annum for the course of the decade," said Alan Davies, head of the diamond unit for Rio Tinto. "And when you look at the supply response there hasn't been a major find brought on for a long time." 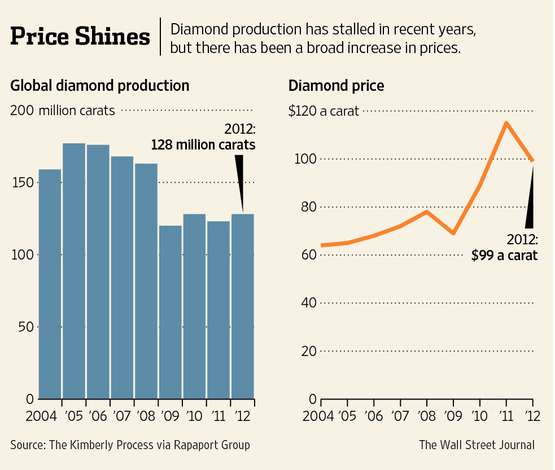 Rio Tinto, which is the world's third-largest diamond producer, had previously mulled the idea of selling its diamond unit just 18 months ago. Anglo American actually went through with it, selling its Ekati mine in Canada to jewelry maker Harry Winston Co. for $500 million.

And the world’s hunger for diamonds is only getting stronger.

Last year, demand for precious gem grew 18 percent in China, while the demand in the U.S. grew eight percent. In the first half of 2014, rough diamond prices charged by major mining companies rose seven percent on average.

Alrosa, the world’s largest diamond producer anticipates a big jump in gem prices as the demand continues to skyrocket.

De Beers is investing $3 billion over 15 years to develop one of the largest open cast mines in the world in Botswana. The site will include an automated diamond recovery plant to filter the gems from other rocks. Earlier this year, South African producer Petra Diamonds sold a rare blue diamond for $25.6 million, or $862,780 a carat. With those type of prices miners are now investing heavily into automated technology to help recover more harder-to-reach diamonds.

As the demand for diamonds continues to rise, don’t be surprised if more mining companies begin entering the market.