The World Gold Council has published its full-year 2015 Gold Demand Trends report, outlining the latest developments in gold demand and supply during 20...

The World Gold Council has published its full-year 2015 Gold Demand Trends report, outlining the latest developments in gold demand and supply during 2015 by sector and by region.

After a challenging first half-year, gold demand steadied and strengthened between July and December. For the last two quarters, demand was bang in line with its five-year average. The gold market faced a number of obstacles in the first half of the year. This is clear in the data: H1 demand declined by six percent year-on-year, due to a sluggish Q1 followed by a very weak Q2. There were a number of reasons for the weakness in H1. Extreme adverse weather patterns buffeted Indian demand for jewelry. Economic slowdown combined with financial market turbulence hit demand in China. And global investment was undermined by the largely range-bound gold price and resurgence in risk appetite, which went hand-in-hand with a more positive outlook for the US economy. There were other detrimental factors, too: Turkey’s currency plummeted on domestic political upheaval; and the falling oil price and regional conflict damaged demand in the Middle East. All in all, a not favorable condition for gold demand but the second half of 2015 was a different story.

Consumer resilience in the fourth quarter was somewhat surprising, given turbulent economic, climatic and socio-political conditions in many of the markets. India and China were the mainstays of the global market – despite facing a number of challenges – while growth also came from some unexpected quarters. 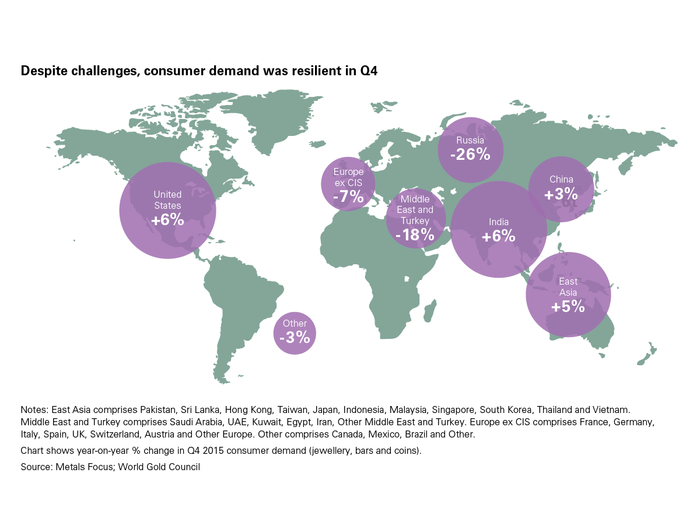 Consumer demand pulled ahead of its five-year quarterly average. Heavyweights India and China held firm in the face of challenges. The resilience of consumer demand in the fourth quarter was somewhat surprising, given inhospitable economic, climatic and socio-political conditions in a large number of markets. Demand for jewelry, bars and coins totaled 934.9t, almost matching the Q4 2014 total (938.3t) and exceeding its 5-year average (913.8t). India and China were the mainstays of the market, despite facing some not insignificant hurdles. But growth also came from some unexpected quarters, including Japan, Vietnam and Iran. 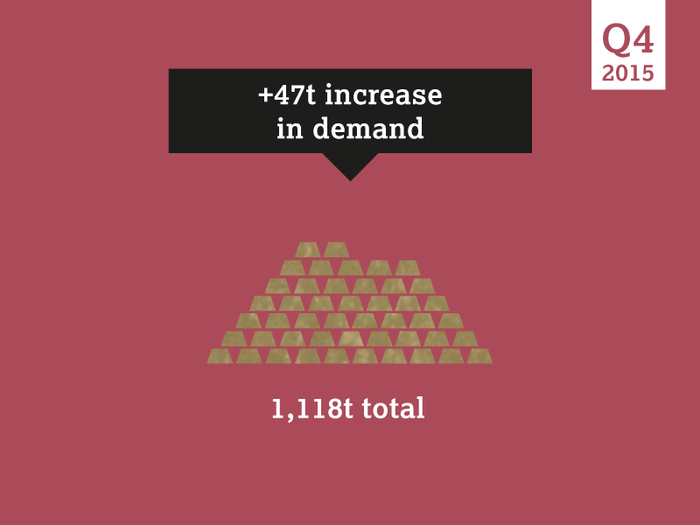 Mine production in 2015 saw its first quarterly decline and its slowest annual growth rate since 2008. Annual gold recycling dropped again, hitting its lowest level since 2007. With mine production expected to fall in the next year, supply will remain constrained. Total supply in 2015 fell four percent to 4,258.3t – its lowest level since 2009 – as mine production contracted and recycling reached multi-year lows in the fourth quarter. Mine production fell two percent in Q4, due to reduced output at a number of large established mines; de-hedging of 15t further reduced supply available to the market. Recycling continues to be squeezed in a lackluster price environment – 227.4t was the lowest quarterly figure since 2007. Mine production declines overshadow gains in fourth quarter Mine production fell two percent in Q4 2015, from 841.2t to 824.8t – the first quarterly decline since the third quarter of 2008. Annual production totaled 3,186.2t in 2015, up just one percent from the 3,140.5t of gold produced in the previous year. This is the lowest level of annual growth since 2008. Papua New Guinea and Brazil were two of only a handful of countries which generated sizable year-on-year gold production growth in the fourth quarter. For the former, this was due to the continuing ramp-up of the newly expanded plant at Newcrest’s Lihir project; while the latter was driven by increased small-scale production. Yet the limited increases in the final three months of 2015 were comfortably countered by numerous declines.

Investment demand in 2015 was up eight percent on 2014. Modest growth in bar and coin demand was supported by smaller outflows from ETFs.

Investment demand in Q4 increased 15 percent year-on-year, from 169.3t to 194.6t. This fed through to an eight percent rise in 2015 annual demand (878.3t vs 815.4t). Total bar and coin demand expanded only marginally. The pattern of gains and losses at a market level closely followed those in the jewelry space: demand grew in India and the US, while Turkey, Russia and the Middle East all witnessed declines. The only notable exception was the Greater China region, which saw a significant improvement. In terms of year-on-year growth in investment, some context is required as the positive comparison stems largely from exchange-traded fund (ETF) flows being ‘less negative’ than before. Outflows from ETFs and similar products were lower in Q4 than in the previous year: -68.9t vs -91.5t. For 2015 as a whole, ETFs saw outflows of 133.4t compared with 185.1t in 2014. But it is important to clarify that there were continued outflows.

Central banks and other institutions 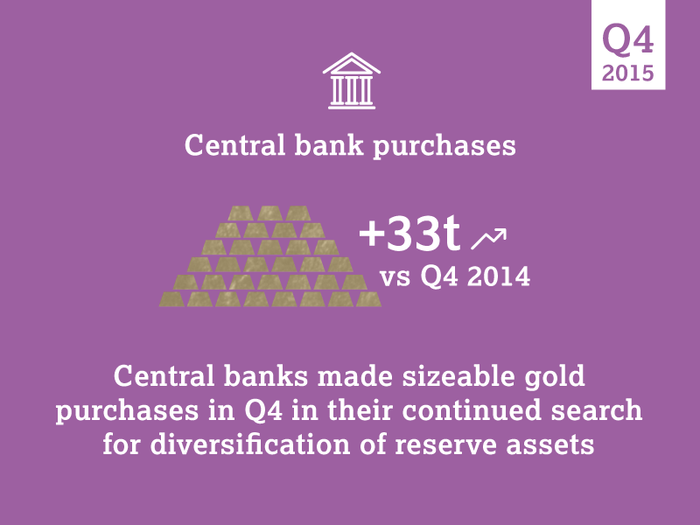 Net purchases by central banks and official institutions surged in the second half of 2015 – resulting in the second highest annual demand in our records. Central banks net purchases ended the year strongly at 167.2t in Q4, up 25 percent from 133.9t in the same period of 2014. This brought net purchases for 2015 to an impressive 588.4t, one percent higher than 2014’s chunky total of 583.9t. The annual total was significantly higher than our initial expected range of 400-500t, and comfortably towards the top end of our revised expectation of 500- 600t. This shows that the pivotal change in 2010 – from net sellers to net purchases – has staying power. Economic and geopolitical risks continued to worry global markets. And early events in 2016 make clear that reserve management – particularly diversification away from the US dollar – remains essential. Central banks are keeping their foot firmly on the gold purchasing pedal. See the full report here.

Vinneth Bajaj, Associate Project Manager at GlobalData, comments: “Declines from Brazil and India were major contributors to the reduced output in 2020. Combined production from these two countries fell from a collective 638.2Mt in 2019 to an estimated 591.1Mt in 2020. The reduced output from the iron ore giant, Vale, was the key factor behind Brazil’s reduced output, while delays in the auctioning of mines in Odisha affected India’s output in 2020.

“Miners in Australia were relatively unaffected by COVID-19 due to effective measures adopted by the Australian Government, while a speedy recovery in China led to a significant 10.4% increase in the country’s iron ore output.”

Looking ahead, the global iron ore production is expected to increase by 111.3Mt to 2,302.5Mt in 2021. Rio Tinto is expected to produce up to 340Mt of iron ore, while BHP has released production guidance of 245–255Mt, supported by the start of the Samarco project in December, which is expected to produce between 1–2Mt.The company has retained its guidance for Australian mines at 276–286Mt on a 100% basis, due to scheduled maintenance work at its ore handling plant and tie-in activity at the Area C mine and South-Flank mine.