Copper is a vital part of green infrastructure, from grids to wind turbines - a recent price surge threatens to make decarbonization more costly...

Copper has doubled from the lows seen a year ago and is near a nine-year high, reports Bloomberg. Amid predictions of a new commodity supercycle kicking off, many analysts say the top hasn’t yet been reached for a metal that’s core to the green energy drive.

Demand from renewable power generation, battery storage, electric vehicles, charging stations and related grid infrastructure accounts for about a fifth of copper consumption, according to Citigroup Global Markets. With governments aiming for aggressive net zero emission targets in the coming decades, that means more clean electricity, a shift that’s likely to be copper-intensive given the $28.7trn grid build out required.

Part of that growth will come from the need to connect new renewable power plants with customers. That’s because it’s often cheapest to build such plants wherever the wind or sun resource is strongest, which could be in the middle of the sea or an isolated desert. But that then means a lot more cabling, using expensive copper, than a centralised grid needed in the past.

According to forecasts from BloombergNEF, the global power grid will grow by 48-million kilometers (30-million miles) by 2050. That’s enough to wrap around the circumference of the Earth nearly 1,200 times and equates to a doubling in copper demand to 3.6 million metric tonnes.

“Cities, electrification and copper go together,” said Sanjeet Sanghera, an analyst at BNEF in London. “Copper plays an important role.”

The metal is heavily used in underground cabling because of its conductivity, which is almost twice that of aluminium. That lowers the amount of energy needed to produce electricity.

A 240-kilometer electricity interconnector between Britain and France called IFA2 used 9,000 tonnes of copper, according to the UK’s National Grid. A planned link to Denmark of 760 kilometers will require 26,000 tonnes. 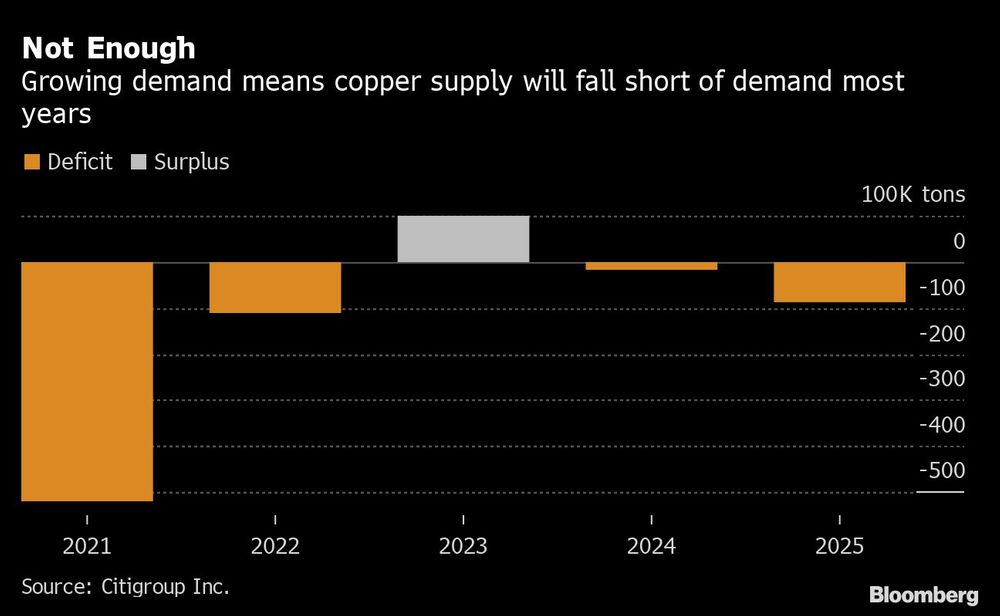 In offshore wind projects, copper is still a relatively small component of costs, but that’s set to increase in the coming years, to about 3% by 2050 from 1% currently, according to BNEF.

If copper’s rally proves long-lasting and pushes up the cost of green investment, some wind farms may use cheaper aluminum where they can. Prices have risen less sharply, up 28% in the past year compared with 62% for copper. Demand for aluminum in power grid infrastructure is estimated to reach 7.6 million metric tonnes by 2050, according to BNEF.

“We see copper remaining integral for interconnectors,” said Srinivas Siripurapu, Chief Innovation Officer at cable manufacturer Prysmian. “But for offshore wind farms, there’s a lot of indications that there will be a push more towards aluminum driven by overall costs.”

It’s not yet clear how much of an immediate impact copper’s price increase will have on the finances of green power operators. Turbine maker Siemens Gamesa Renewable Energy hedges raw materials prices a year ahead, protecting them for now.

The metal’s rally has been driven in large part by investors who see demand soaring as the green revolution gathers pace. But their early optimism may end up pushing up costs for governments as they start putting infrastructure spending packages to work.

Higher copper consumption for decarbonization could drive annual demand growth of as much as 3%, said Max Layton, Managing Director for Commodities Research at Citigroup Global Markets Inc. That will add to periods where supplies fall short, with upside potential for prices.

While elevated prices mean companies have an incentive to ramp up investment in mining, which would help supplies, the downside is the length of time it takes to get projects up and running.

“If this price level holds, we should see announcements of new projects coming in the market,” Raul Jacob, Chief Financial Officer of Southern Copper Corp, said in an interview Monday. But the lags from decision to production will make the price cycle “a little bit longer than in the past.”

Mining 4.0: How innovation is shaping mines of the future
Benjamin Byrne & Chris Engdahl
May 6, 2021

The reopening of major industrial economies is sparking a surge across commodities markets from corn to lumber, with tin climbing above $30,000 a tonne for the first time since 2011 on Thursday.

In the wake of mounting evidence of inflation fuelled by higher raw materials prices, investors are also increasingly focused on when the U.S. Federal Reserve might start throttling back its emergency support.

Many banks say the rally has further to run, particularly for copper, which will benefit from rising investment in new energy sectors. Copper is at the highest in a decade, fueling bets it will rally further to take out the record set in February 2011. Steel demand is surging as economies chart a path back to growth just as the world’s biggest miners have been hampered by operational issues, tightening ore supply.

“The long-term prospects for metals prices are ‘too good’ and point to higher prices in the next few years,” said Commerzbank AG analyst Daniel Briesemann. “The decarbonization trends in many countries, which include switching to electric vehicles and expanding wind and solar power, are likely to generate additional demand for metals.”

Benchmark spot iron ore prices rose to a record, while futures in Singapore and China climbed.

The boom comes as China’s steelmakers keep output rates above 1 billion tons a year, despite a swath of production curbs aimed at reducing carbon emissions and reining in supply. Instead, those measures have boosted steel prices and profitability at mills, allowing them to better accommodate higher iron ore costs.

Erik Hedborg, Principal Analyst, Steel at CRU Group commented: “Recent production cuts in Tangshan have boosted demand for higher-quality ore and prompted mills to build iron ore inventories as their margins are on the rise. Iron ore producers are enjoying exceptionally high margins as well, around two thirds of seaborne supply only require prices of $50 /dmt to break even.”

Still, some analysts including Commerzbank’s Briesemann expect a short-term correction as metals become detached from fundamentals. There’s also a risk that China could engage in policies that may cool demand for iron ore and copper.

The metals rally has boosted concerns about short-term Chinese demand. Some manufacturers and end-users have been slowing production or pushing back delivery times after costs surged, while weaker-than-expected domestic consumption has opened the arbitrage window for exports.

Tin climbed as much as 2% to $30,280 a ton on the LME, boosted by rising orders for the soldering metal. Tin is at the highest since May 2011, with a 48% gain this year making it the best performing metal on the LME.