Suntrace and Baywa r.e complete commissioning of the world's biggest solar-battery hybrid system for the mining industry at the B2Gold Fekola mine in Ma...

Suntrace and BayWa r.e., together with B2Gold, have completed commissioning of the world’s largest off-grid solar-battery hybrid system for the mining industry, at the Fekola gold mine in Mali, West Africa.

The solar-battery hybrid plant was integrated and commissioned successfully with the existing power plant operation, and the solar plant is on course to be 100% complete by the end of June this year.

Hybrid projects such as this, which combine solar energy with conventional energy generation and battery storage, are an effective way to provide reliable power supply day and night in off-grid areas. Ideally suited to their needs, B2Gold approved the hybrid project for implementation in July 2019, following completion of preliminary studies by Suntrace and BayWa r.e..

The Fekola gold mine operates 24-hou rs a day. During the daytime, the new 30 MW solar plant allows three out of six heavy fuel oil generators to be shut down; the energy production of the residual three generators could also be significantly reduced. The 15.4 MWh battery storage compensates energy generation fluctuations and assures a reliable operation, which allows up to 75% of the electricity demand of the gold mine to be covered by renewable energy during the daytime.

Dennis Stansbury, Senior Vice President at B2Gold, commented: “Suntrace and BayWa r.e. have played a vital role in our work towards more sustainable production at Fekola. The implementation of a solar-battery hybrid system was an obvious choice to help achieve this, not only for its environmental credentials, but also its economic viability. This is a landmark project which we expect to pave the way for more sustainable power generation within the mining industry in West Africa.”

The integration of the solar power plant with the battery system will ensure safe and reliable power, saving 13.1 million litres of heavy fuel oil (HFO) a year. The close collaboration of all three parties as one team was vital to implementing this complex project, helping to realise the huge potential of solar battery hybrid systems. 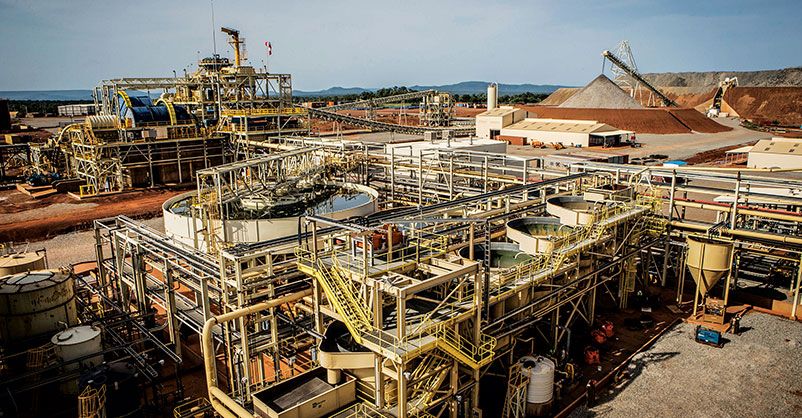 Martin Schlecht, COO at Suntrace, said: “We are very proud that B2Gold has entrusted Suntrace, together with BayWa r.e. as Engineering and Procurement contractor, to support the development and implementation of this innovative project. Thanks to excellent team work with B2Gold and BayWa r.e., we were able to manage the completion despite the global challenges that the COVID-19 pandemic imposed on all of us. We are proud to jointly deliver a functioning project, well integrated with the mining operations, which reduces CO2 emissions from power generation for the Fekola mine by roughly 20%.”

The PV-battery system will help to reduce CO2 emissions by 39 000 tonnes per year.

Thorsten Althaus, Project Manager at BayWa r.e., added:  “Integrating such a large amount of solar into a small, isolated grid safely and reliably has been a major technical challenge and required the use of battery storage as well as a tailor-made control system. This was conceptualised in the early stages of the project and we ensured that our vision was implemented accordingly by the suppliers. It is extremely rewarding to see how well this solution performs in reality and shows that the technology works and is just waiting to be applied on further projects.”

Saudi Arabian Mining Company (Ma’aden), one of the world’s fastest-growing global mining companies, celebrates the fifth anniversary of Saudi Arabia’s Vision 2030. The Kingdom’s mining champion highlights key achievements since the Vision 2030 launch and plans that reflect its commitment to the Kingdom’s social and economic development.

The Kingdom has implemented significant incentive programs and announced major reforms in the last five years to accelerate the development of the mining industry as a strategic pillar of the Saudi economy, including the recently launched mining investment law to attract investors and pave the way for the full utilisation of Saudi Arabia’s mineral resources, which are estimated to be worth more than $1.3trn. This goes in line with the objectives of the National Industrial Development and Logistics Program (NIDLP), one of the most important programs for achieving Vision 2030.

Ma’aden has kept its projects across a range of commodities moving on a strong growth trajectory since 2016. The company has expanded its investment portfolio, refinanced key projects, and made its first international acquisition, laying the foundation for future growth and new investment opportunities in the Saudi mining industry. Despite some challenges in 2020 due to COVID-19, Ma’aden managed to maintain its agility and remained focused on its goal to become a global Saudi mining giant, while adhering to the highest standards of health, safety, and environment.

Located on the east coast of Saudi Arabia, Ras Al-Khair Industrial City jumpstarted the mining industry development in Saudi Arabia, leveraging the country’s strategic location in connecting three continents. In November 2016, Ras Al-Khair Industrial City was further expanded and connected via railway to Ma’aden’s bauxite mine in Qassim and phosphate mine in Al Jalamid, making it a cornerstone of the Kingdom’s mineral and metal production and export industries.

Ma’aden’s integrated ‘mine to market’ aluminium value chain is the largest in the Middle East and one of the largest in the world, with investments over $11bn. Aluminium products of the highest international standards are sold to both domestic and global markets, encouraging the development of additional downstream aluminium-based industries in Saudi Arabia and neighboring countries. Operations are centered around the largest and most efficient vertically integrated aluminium complex in the world, in Ras Al Khair Industrial City, which also houses sulfur and phosphate production facilities.

Intending to capture the full value of Saudi Arabia’s significant phosphate reserves and develop new mining and mineral activities, in 2018, Ma’aden celebrated the inauguration of the industrial city of Wa’ad Al Shamal by the Custodian of the Two Holy Mosques King Salman bin Abdul Aziz. Wa’ad Al Shamal is a world-class industrial and mining city in the Northern Borders region of Saudi Arabia. This phosphate super hub will continue to grow with Ma’aden’s latest phosphate megaproject, which is primed to increase phosphate fertilizer capacity to reach 6 million tonnes, making Ma’aden the world’s third-largest producer of phosphate fertilizer and Saudi Arabia the second largest global exporter.

In 2018, Ma’aden also acquired an 85% stake in Meridian, the Mauritius-based fertilizer distribution group, strengthening its position as one of the world’s largest producers and exporters of phosphate fertilizers. This acquisition marked Ma’aden’s first investment outside the Kingdom, in line with the company’s goal to expand globally and significantly contribute to the Kingdom's Vision 2030.

In 2019, Ma’aden commenced construction of the Mansourah and Massarah gold mine, the company’s largest-ever gold project and the Kingdom’s first project to utilize solar power as an energy source. Once operational, the mine and its processing facilities will have a key role in achieving Ma’aden’s target of producing 1 million ounces of gold per year by 2025.

These accomplishments are all due to the steppingstones set by the Saudi Vision 2030, which laid the foundations for creating an attractive environment for local and foreign investments in promising growth sectors and unlocking new ones, in addition to developing remote areas, bringing technologies and knowledge to the Kingdom, establishing specialized and modern industrial cities, and generating diverse job opportunities for Saudi nationals.