GlobalData analysis points to increased coal production of up to 6.6% in 2021 from the likes of Glencore, Peabody, Coal India and BHP...

GlobalData expects production from the top ten companies to be between 1,683-1,740Mt in 2021, which is an increase of up to 6.6% compared with the collective output in 2020 (1,633Mt). Operating activities, backed by the rollout of vaccine and strict COVID-19 protocols on-site, returning to normal is expected to be a key production driver for companies in 2021. 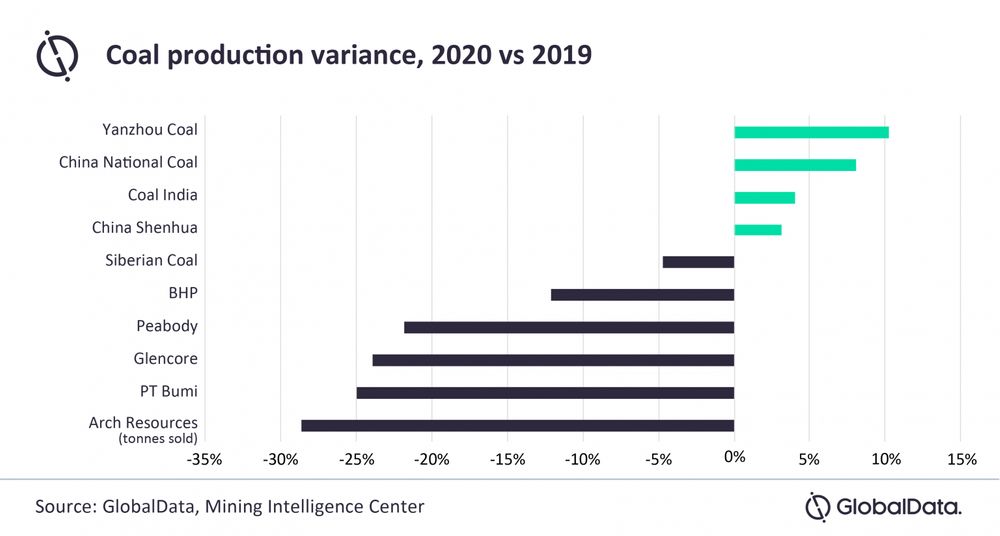 Production from Arch Resources (formerly Arch Coal) declined primarily due to the sale of the Holden #22 Surface mine in December 2019, coupled with weak economic conditions during Q1 2020. In addition, the temporary suspension of the Viper mine in Q2 2020 further disrupted the company’s coal production.

“Scheduled production cuts across the Australian portfolio also impacted the company’s overall output as did the placement of the Prodeco mine under care and maintenance and strikes at Cerrejon between August and December 2020.”

Peabody’s output dropped primarily due to the upgrade of the main line conveyor system at Shoal Creek, alongside pit sequencing work at Moorvale and a dragline outage at Coppabella. In addition, the company also suspended operations at the Wambo underground mine for around 59 days during the second half of 2020. The closure of mines including Kayenta and Cottage Grove (Q3 2019) and Wildcat Hills (Q2 2020) further impacted the company’s output.

Bajaj continued: “BHP’s coking coal production was impacted by planned maintenance at the Saraji and Caval Ridge mines, environmental disruptions at La Nina, and lower yields at the South Walker Creek and Poitrel mines. Meanwhile, the thermal coal segment, from which the company is expected to exit in the near future, was affected by a 91-day strike at Cerrejon, which started on August 31, 2020.”

“In contrast, production from Coal India rose by 4% owing to a recovery in the offtake from India’s power sector, which was supported by a resumption in industrial and commercial activities as the country’s electricity demand started to recover from the COVID-19 setback,” said Bajaj.

“Output from China Shenhua, Yanzhou and China National Coal Group also increased, rising by 3.1%, 10.2% and 8.1%, respectively, in 2020, mainly owing to a quick recovery in China, particularly during the second half of 2020.”

The world’s biggest miner, Australian-based BHP, is supposedly considering withdrawing from a multi-billion dollar contract, which would see the company generate more than US$2bn due to mounting pressure over aligning its business with ongoing climate concerns and ESG-compliance measures.

Exiting the agreement would mean BHP escalate its distancing from oil and gas and subsequently cut down on the amount of fossil fuels used by the company when mining.

It’s estimated that the petroleum business being debated upon could actually be worth around US$15bn but is still under talks to be put up for sale.

BHP has made itself clear that it wants to avoid becoming unable to sell its assets. As competition within the market increases following higher numbers of oil giants wrestling with investors to deal with climate pressure, so too are the number of mining rivals looking to make environmental changes for the future.

However, BHP currently has the upper hand as a stalwart mining company that established itself back in the 1960s, allowing it the time to grow and dominate over other fast-appearing mining competition.

Mike Henry, BHP Chief Executive, has an optimistic outlook for the future of oil and gas despite worries over rising demand to align his business with the Paris Climate Agreement. Henry argues that prices remain promising due to a lack of industry-wide investment.

BHP’s petroleum business won’t be easy to say goodbye to. Forecasted to generate around 6% of profits during the ongoing financial year (US$2bn), and around US$1.6bn revenue produced by BHP petroleum in the six months leading to December 2020, BHP is due to take a hit no matter what agreement they choose.

On the other hand, distancing itself from thermal coal and petroleum would arguably aid the company’s case to possible - and valuable - investors who may be required to fund BHP’s increased output to places such as Australia and Mexico in the near future.

An exit away from petroleum has the potential to be “a powerful corporate catalyst,” says Dominic Kane, Analyst at JP Morgan.

BHP is also set to sanction a giant US$5.7bn Canadian potash mine in August of this year, already seeing potash as a long-term substitute for gas and oil going into the future. The company has also previously announced plans to abandon its 80% share in its joint endeavour with Mitsui, owner of two lower-quality mines in Queensland, Australia.

BHP is scheduled to report its annual results on August 17, after which it may become clearer on whether the company will choose to focus its shift to a low-carbon economy or whether it will stay with its current contract into the coming year.

Follow us on LinkedIn
The Latest Issue of Mining Global