Platinum receives a boost from the green economy

After a decade in the doldrums, South Africa’s key platinum industry reported windfall profits last month as supply deficits pushed palladium and rhodium to record highs. Recent legislation to curb pollution from gasoline and diesel engines is boosting the use of platinum-group metals in autocatalysts, the biggest PGM consumers, reports Bloomberg. That’s keeping the bonanza going for miners, even as the growth of electric vehicles poses a longer-term threat to demand.

“It’s certainly given them a new lease of life and some have added life to assets that were meant to be shut down already,” said Mandi Dungwa, an analyst at Kagiso Asset Management Ltd. in Cape Town. “There were a lot of questions around how long some of these mining companies would continue to exist.”

Platinum mine bosses are upbeat. Stricter rules will increase PGM use in vehicles by an average of 20% over the next 10 years, said Anglo American Platinum CEO Natascha Viljoen.

“It looks like this one could last longer than previous cycles because it’s driven by a legislative push to reduce emissions,” said Arnold Van Graan, an analyst at Nedbank Securities Ltd.

Autocatalyst demand for platinum, which was dented by the switch away from diesel cars, is likely to rise by two-thirds to 4.5 million ounces by 2025 as automakers substitute the metal for more expensive palladium, according to Sibanye Stillwater CEO Neal Froneman.

“The fundamentals from a producer’s point of view get better and better as we look further out,” Froneman said in an interview. “So for at least 10 years there is no reason why this trend should be any different.” 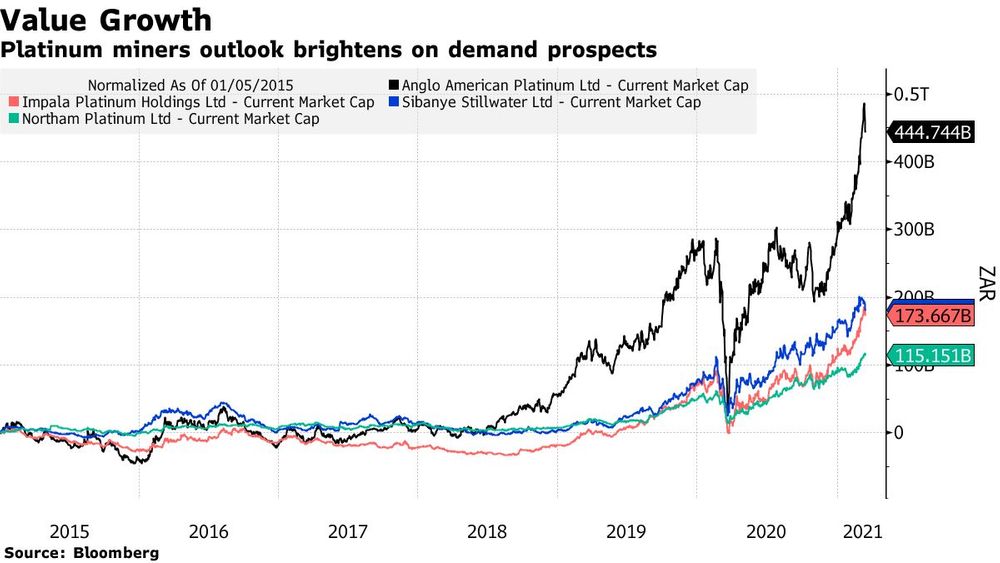 The robust outlook and profit windfall has resulted in companies starting to expand output after more than a decade of shunning investments. Future demand could be met without oversupplying markets, according to Impala Platinum Holdings Ltd. CEO Nico Muller.

Longer term, the proliferation of electric vehicles raises challenges as they gradually displace the combustion engine that’s helped drive PGM consumption. Much will depend on whether the nascent hydrogen industry can offer new sources of demand to offset the hit from EVs.

For the moment, the outlook is uncertain, according to Rory Kutisker-Jacobson, a portfolio manager at Allan Gray Ltd. in Cape Town.

“The transition to electric vehicles is negative for PGM metals, but this needs to be balanced against continued tightening emission standards and a growing hydrogen economy, which are positive for PGM demand,” he said. “If history is any guide, prices and profits are likely to come under pressure.”

Comprising mining companies, equipment manufacturers, tech companies and universities, NEXGEN SIMS was launched on May 1. The project will pursue collaborative partnerships across new technologies, methods and processes to increase the efficiency and sustainability of mining operations globally.

NEXGEN SIMS builds on the successful SIMS project, which ran between 2017 and 2020 and played an important role in improving sustainable mining operations. The latest iteration of the project will cover advances in smart mining and mineworker-of-the-future use cases, develop autonomous mine inspection technology to enhance personnel safety and boost productivity, cost-efficiency and sustainability.

Thomas Norén, Head of Dedicated Networks, Ericsson, commented: “Our Ericsson Dedicated Networks solutions bring reliable connectivity and safety to the mines. This in turn enables the implementation of new use-cases that rely on it and that are not possible to realize with legacy mine networks today.”

He added: “The Intergovernmental Panel on Climate Change has called for global greenhouse gas emissions to be halved by 2030, reaching net-zero before 2050. This goes across all sectors. Ericsson welcomes the opportunity to support dedicated projects to develop carbon free mining processes to directly reduce operational emissions in the mining sector, while creating a safer and more autonomous mining process.”