Mining Global spoke with H Robotics Founder Dr Pippa Malmgren to hear how HiSight - a ‘modular, robotic meta-platform in the sky’ - is more than just a drone and can empower the mining industry in its push for digital transformation.

H Robotics manufactures HiSight - an ‘aerial robotic tool’, otherwise known as a drone. It has the potential to be used for many tasks and purposes on mining sites. However, most drones employed across sectors today are fundamentally souped-up toys originally designed for a retail consumer - very few are actually designed for industrial paths. With the deployment of bespoke drones in mining very much in its infancy, H Robotics Founder Dr Pippa Malmgren maintains that comparing HiSight to most drones on the market is like comparing a go-kart to a Land Rover: “We make an industrial tool - it's rugged, easy to fly, durable in extreme weather conditions, and, at this stage, the only industrial drone in the world that lands and takes off from water - vital at oil, gas and mining sites.”

Malmgren explains HiSight is an open platform in the sky that can store data collected securely in the H Robotics FlightCloud: “You can attach devices such as sensors and cameras to HiSight in a stable position to fly over your assets. But most drones don't work that way, everything's embedded inside, so you have to work with what they give you.” HiSight is fitted with industrial grade lights and a transducer which emits a high pitch alert which can even aid security on mining sites prone to theft during down time. “It’s like having a scarecrow in the sky,” she jokes.

HiSight can also be deployed to provide precise volume metric analysis of aggregate, vital for accurate valuations of mining sites. An African mining client of H Robotics has utilised this system, describing it as a “game-changer” enabling them to keep a closer eye on production targets rather than relying on less accurate quarterly manual measurements. Malmgren notes most mines across the globe use various toxic fluids to blast through rock which end up in a tailings dam. This needs to be monitored in order to prevent it from overflowing which would cause environmental damage. “To measure this at the African mine, they would often send out a boat with sonar onto the lake of toxic run off,” says Malmgren. But with the threat of hull erosion, and attack by crocodiles capable of resisting the toxic lake, it’s a dangerous business that required a solution…

“We’ve created a sonar device for our drone that captures not only the boat volume, but shows the shape of the basin, telling you whether liners are coming unstuck - which could be a huge source of environmental damage and massive cost to a mining company,” she says. “We've created something every mine in the world needs, but they don't currently have.” She argues the industry has a two-dimensional approach to drones and been too focused on what they can deliver rather than what they are really good at - gathering data. “When our drone flies overhead it uploads the data automatically. Every single flight is not only tracked and logged, but video is automatically uploaded into our FlightCloud providing a permanent visual record.”

Malmgren highlights differing philosophies in the drone industry. “China’s approach is build-to-break. It’s a production line and they want you to come back and upgrade… We decided to build something that’s almost unbreakable, and it's modular. If you do manage to break an arm, for example, you simply remove it, snap a new one on, and you're back at work. And that matters because when you're running a mining operation you can’t afford the down time while you wait for a new device to be sent. At H Robotics, we'll replace everything, no questions asked, as long as it was operated autonomously, full replacement at no cost. This is a total change in how the industry supplies hardware.”

Malmgren notes the American philosophy is built around the only person capable of flying a drone being a highly qualified military pilot. “The industry is dominated by a business model where companies hire pilots at a cost of thousands of dollars per day. But here’s the problem… They tend to fly manually, which means none of the data is comparable over time - hugely important when you're dealing with physical sites at risk from environmental factors. Pilots own your data, and you have to pay them in addition, to access it. So you could be paying as much as $100,000 to receive your data with the added problem that they don't know your business as well as your employees do.”

H Robotics maintain they have built a tool, not a toy, that even the most junior person on a mining staff in the middle of Africa can easily deploy without having to be a professional pilot thanks to the ability to set different flight paths for autonomous use across a mining site. “Humans make errors, so we're reducing those by removing humans from the flying process but exponentially increasing the knowledge and understanding of what's happening. Because all of the data from our FlightCloud can be immediately overlaid with whatever software the client requires. This offers mines the ability to see the photogrammetry, or the live images on their mobile devices anywhere in the world. So now the CEO can be in London, and the junior staffer could be somewhere in South Africa, but through autonomous flight we've given real time, eyes on site to senior management with remote access. For example, it would allow them to put on VR goggles and walk through the aftermath of an avalanche site to fully understand the financial implications for the business.”

Malmgren is rightly proud of the way her company is empowering young women working in mining in Africa. “They are able to deploy our robotic tools in a world which said they weren't capable. And they are better at problem-solving than these external guys because they're miners, so they understand what’s important to address on a mining site. It’s a game-changer not just in terms of cost reduction but the dramatic increase in useful problem solving.” 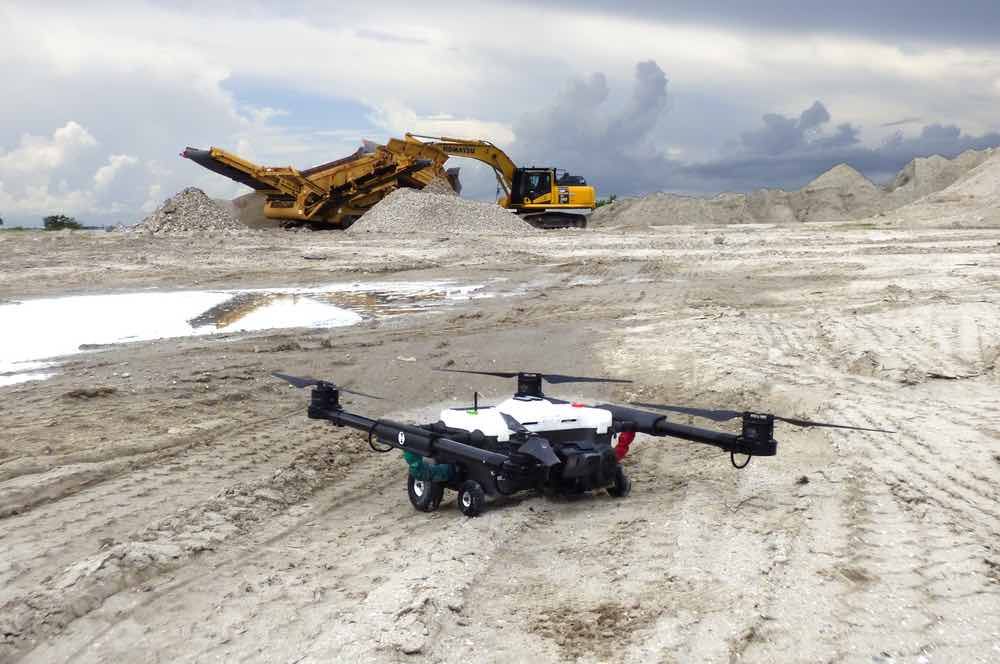 The urgent need for inclusion and diversity in the industry allied with the enhancement of opportunities for women is an issue close to Malmgren’s heart. Named as one of We Are Tech’s Top 100 Women in Tech, she has also been lauded as one of Inspiring Fifty’s (Google-sponsored) Women in Tech. These plaudits recognise her achievements with H Robotics - part of a new wave of digital businesses re-shaping the world we live in. Like many other companies emerging with a new tech offering in the sector, H Robotics is keen to build a network of partnerships supporting its growth. But when you’re hoping someone will return your call it can be tough. But not so tough when your founder used to work for the President of the United States and advised governments and major corporations around the world on economic policy.

“When I call a global mining company, it's usually because I know the CEO or members of the board of directors,” explains Malmgren. “It’s hugely valuable in terms of being able to supply a market like mining, which like many industries eager for new technology is slow to embrace it. You have to prove to them it's really worth it. As an economist they know I understand why it's important it generates a fast return on investment, and that they can't wing it on a maybe.”

Analysing future trends by taking an aerial view is where Malmgren pledges H Robotics can add value to any mining business: “Drones will be increasingly used by insurers and accountants so we’ve introduced a blockchain-type concept with our tools. Put simply, it’s an aerial view which is timestamped so you can see exactly when events occurred to analyse things like safety procedures and measurements as part of a visual audit trail.” The industry emphasis on safety represents a real opportunity for industrial drone developers. Malmgren cites Australia’s mining industry as a key market where drones can ensure the safety of workers by taking on potentially dangerous visual observation and measurements recording data from the top of a heap of aggregate.

We live in a world where inflation is back on the agenda, so with Malmgren’s unique perspective as an economist and mining professional what are her predictions for how the industry can and must respond? “We’ve seen a mining downturn triggered by a lack of investment in capacity since the financial crisis - the same is true of other sectors such as oil and gas. We’re now experiencing capacity shortages, in a world economy growing surprisingly better than everybody expected. It's still controversial to say this because most people think the world economy is about to roll over... but $20 trillion of quantitative easing is still out there in the world economy.

"Investors are aiming to get out of cash due to the pressure of inflation so they’re looking to put their money in the real economy through buying equity. I think the smart investors are hoping there’s a significant pull back in equity prices, because then they'd buy everything - with every pension fund in the world under-funded they can't afford not to. That's part of the reason I think we're seeing an annulation of hard assets rising, and it's not just raw materials, it's infrastructure too.

"Meanwhile, a new world of cryptocurrencies shows there are those who believe we could have currencies without any hard assets underpinning them. A reaction to that has been a new bid for gold proving that ultimately the mining industry is not going to disappear. The other key pressure on mining is from sustainability and environmental issues, but increasingly miners are aiming to respond positively to these concerns and I think drones can be a huge part of that effort.”

Looking ahead Malmgren will be speaking at the World of Drones congress in Brisbane in September while H Robotics is in discussions with the Australian government and its mining community about supply robotics to the industry as it has done in Africa. “We're also working in other sectors,” she adds. “We're starting to work with oil and gas companies and have been listed as a supplier to Shell. We’ll be expanding our work with insurance companies and both fire and police departments. We’re keen to get people thinking about the multiplicity of use… For example, poor community relations are a typical problem in the mining industry. So why not use drones like HiSight to support medical emergencies in remote locations? We can help companies deliver a community service as well as automating many mining tasks.”

Malmgren reveals the next step for HiSight will be to further develop its capabilities to capture samples on mining sites and deliver ground penetrating radar for surveys: “We’re in discussions with top scientists working towards having a device that you'll attach to HiSight, that will actually drill down and take surface samples. Because it's one thing to have geo-spacial data, and granular drone level data, but miners will ultimately need that sample.”