Featured Article
AusIMM
mining
metallurgy
Australia
The Australian Institute of Mining and Metallurgy (AusIMM) has revealed the results of its Professional Workforce Survey 2018. It predicts a healthy out...

The Australian Institute of Mining and Metallurgy (AusIMM) has revealed the results of its Professional Workforce Survey 2018. It predicts a healthy outlook for the resources sector in the region, indicating a return to full employment for professionals.

Back in September, AusIMM invited all of its members to complete the survey and received 1593 responses, providing a broadly representative sample of resources professionals.In addition to collating employment and remuneration data among resources professionals, the 2018 survey included questions relating to volunteering, diversity and inclusion, and professional development.

The survey points to a strong upturn in employment across a range of occupations and levels. However, in most categories, salaries have not increased significantly – as is the case in the wider Australian economy.

A significant improvement in unemployment statistics was recorded over the past two years with the figure down from 14.1% to 2.6%. Australian unemployment levels were more volatile than in other regions in 2016 but are now 3% lower in 2018.

By professional discipline (Figure 3), AusIMM found that geotechnical engineers ‘got back to work’ in 2016, with geoscience members doing so slightly later, and mining engineers were really getting back to low unemployment rates this year. Metallurgists, materials and chemical engineers have only more recently reached essentially full employment, which likely reflects the fact their roles are generally process-focused as opposed to focused on mine establishment. 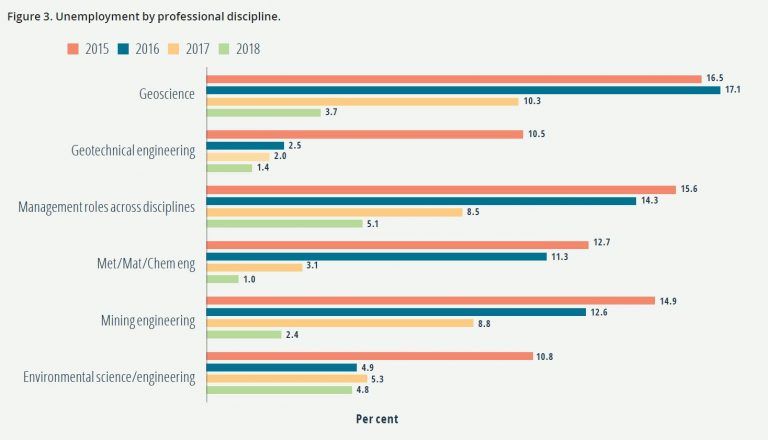 The survey also highlighted the need for more work to be done on industry diversity and inclusion. AusIMM is committed to ensuring the equality of opportunity for all members of the resources sector regardless of race, ethnicity, heritage, gender, age, religion, disability, sexual orientation, gender identity or intersex status. For the first time, this year’s survey captured respondent’s perception of diversity and inclusion in the sector and in workplaces.

Professor Danny Samson, University of Melbourne and Brigid Meney, Senior Adviser, Policy and Media, AusIMM commented: “Males had a higher perception of the extent of diversity in the resources industry than females.Over half of females surveyed expressed the view that the industry was not very diverse compared to 32 per cent of male respondents. Interestingly, there was a disconnect between perceptions of the industry as a whole and perceptions of diversity within respondents’ own workplaces.

“Higher percentages of both males and females had a positive view of the extent of diversity in their own organisation, rather than in the industry at large. The cause of this discrepancy in perceptions of the whole industry compared to individual workplaces warrants further investigation.”

Respondents were also asked to nominate the professional development or learning topics that are a priority for their career development. Most popular topics contained a mix of more technical areas, such as technical descriptions of orebodies and project level education, and management topics such as leadership and finance. Safety and innovation were also of significant interest.

Samson concluded: “While this summary report provides an overall snapshot of the data received, and focuses particularly on the high-level topics of employment, remuneration and diversity and inclusion, over the coming months AusIMM will be using the data to increase the longevity of the survey responses and help shape strategic priorities going forward.”